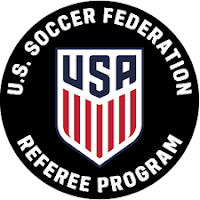 Often times the discussion on this blog regards itself with refereeing or things related to that craft. At times this can get fairly monotonous and even at times "wonkish."

This latter term is not meant as a pejorative, but rather to describe an individual that is really in the weeds on a given topic. Refereeing itself at times is there as we concern ourselves with levels of detail most will never appreciate about The Game, this last weekend however at the 2017 US Soccer referee program workshop in Chicago took me to a whole new level.

At its highest level, this workshop is the place for all US Soccer state associations (there are currently 56 such associations in the US - CA, NY, PA, TX, VA have more than one) to share ideas, meet with the National Office, and generally reconnect with friends.

It was a reminder for me of a couple of things:

First, is US Soccer is generally operated under principles of federalism. Meaning specifically that while there is national governing body in US Soccer, specifically the National Referee Program (NRP), each state association is responsible for administrating their own program. This can have several effects, some good, some less good.

On the good side, while there is guidance provided by the NRP about how some things may be done at the state level, each state may provide as much support as they want into various types of programs. An one example, Massachusetts, and various other states in the US have an advanced referee academy that is supported entirely by the individual state. In Massachusetts this is the Alpha Project and is completely staffed and funded by the Massachusetts State Referee Association. This project is dedicated to creating advanced referees and is done through classroom work, match observation, group coaching, and individual mentoring.

On the less good side, each state is left to their own devices with little or no coordination with other states. This can be very detrimental as the development of referees in the US is not uniform across the US. While state referee programs are a factor, others exist such as the type, amount, and quality of play within the state itself. For example, without a professional team nearby, some referees may never get an opportunity to reach such a level if they were not exposed to it at the right time in their career.

Related to the Workshop, the behind the scenes, behind the scenes was a fascinating look into various state associations working together to make things better for referees in every state. I remain awestruck by the amount of time people are willing to volunteer of there own time and dedicate it to something they may never get back in an effort to make it better for all.

As one of many examples, serious discussion was given to the problem of rogue referee assignors who utilize US Soccer resources to assign referees to unaffiliated matches. There was yelling, screaming, cursing, and serious discussion about how to solve these issues. While so in the weeds it at times gave me a popsicle headache, it was great to see so much energy surround the issue.

When I was a younger referee I never really gave too much thought to what makes the program go, at the state or national levels. Since stepping out of the limelight, I am humbled by the time volunteered by so many.

Next time you get a chance, thank an administrator or volunteer of your choice. I know they would appreciate it.