I have recently come across "Scott Sterling" as he is a particularly useful character to describe a point of emphasis for US Soccer in 2016, Potential Serious Injury (PSI). While the video is intended to do so in a light hearted way (and is morbidly humorous), the message is deadly serious.

... and we have Archer, who I also very much enjoy, whose message is anything but serious.

Thank You Readers of Kicking Back

Friends and Readers of Kicking Back,

Please accept my heartfelt thanks for your readership over these last five(!) years.

Without you, Kicking Back would have remained little more than a unnourished thought. Thank you for turning it into so much more.

As we begin the holiday season, please take a moment to reflect on the thinks that you are thankful for and pay it forward.

Kelly, in his second season as an MLS referee, was the center official for 21 MLS regular season matches in 2015, which was second most among PRO referees. He brought an impressive resumé to his current position: A native of Ireland, Kelly moved through the ranks in his home country, notably winning the inaugural Players’ Football Association of Ireland’s Referee of the Year Award in 2006 (and four subsequent ones). He eventually served as a UEFA official, where he was a referee for Champions League and World Cup qualifiers, among other competitions. ...

What is your safety plan?

Referee Antonio Mateu Lahoz spoke of the ‘troubling, tough’ time in Paris after he blew the final whistle at the Stade de France.

‘We had no idea about what was going on until after the game had ended,’ the Spanish official, 38, told AS when reflecting on events unfolding around Friday’s game between France and Germany.

‘We have all been through some very difficult moments, moments of great uncertainty because, at first, we were told that we were not allowed to leave the stadium, but now things are a little calmer. This is a very troubling, tough moment and I don’t really feel like speaking right now. ...

Kicking Back Comments: Working big stadiums people sometimes think that everything is "taken care of." Nothing can be further from the truth in some cases. There have been situations where the refereeing team needed to be evacuated from a venue in a hurry at the old Foxboro Stadium, and the security manager for the venue (who worked NFL games) was clearly an expert. He had a plan and we were out and escorted by State Police in less than 5 minuets ... and escorted to the highway in 15 minutes.

There have also been venues where I have asked about the safety of the refereeing team and was met with a summer intern and a blank stare. Yes, this was at a professional match as well.

A regular instruction for my teams was if something went really bad, like a riot with a field invasion, lose your refereeing shirt, roll down your socks, start cheering with whoever is yelling the most, and meet at location X.

Do you have a plan next time out?

Alright FIFA ... WTF are you doing about this one?

Turkey and Greece, neighbors that have been often vicious geopolitical rivals for centuries, have attempted in recent years to reconcile their differences, a move that's been given heightened importance during the growing migrant crisis.

Their soccer teams hadn't played each other in eight years, so Tuesday's friendly match in Istanbul presented an opportunity for a power symbolic display of peace and reconciliation. ...


Kicking Back Comments: Here is another opportunity for FIFA to show some leadership. Can we go beyond signs of support (which have their place) and move to actions in the face of such behavior?

FIFA is rightly willing to shutter stadiums for activities they determine racist. How oh how can this be condoned?

So Much For "Friendly"

Authorities in Hanover, Germany, abruptly called off a friendly soccer match between Germany and the Netherlands that Chancellor Angela Merkel had planned to attend to show resolve against terrorism and support for the victims of the Nov. 13 attacks that killed at least 129 people in Paris. One target of Friday’s attacks was a crowded soccer match at a stadium north of Paris. ...

See the whole story here, courtesy of the Washington Post.

Kicking Back Comments: I hate to say that this may be the norm for a while in Europe ... and only a matter of time before it transitions to here in the US.

If you are a referee working such a match ... what is your exfil plan? What is the plan for the teams?
Know before the first whistle as if something happens like it did in France, things will come unglued quickly.
Posted by Unknown at 11/18/2015 07:30:00 AM No comments:

What type of referee are you?

Many times in my playing, refereeing, and assessor career, I have experienced and witnessed several types of referees with very varied motivations. To put these types into groups at times has been hard, but further reflection from my "super nerdy" youth (as opposed to my "hyper nerdy" professional life) allowed me to use my formally epic Dungeons and Dragons skills to describe these character traits within (9) groups. These represent "character alignments" that one may find in life, or for those like me who spent time avoiding life, playing D&D.

A nice synopsis can be found at this link, where I also found the chart below.

Honestly I have seen incarnates or at least shades of each (some stronger than others) in real live referees around the world. It put me down the path of wondering what type of referee I was ...

While I came up with an answer, it took some real soul searching to really determine.

So I ask, what type of referee are you?

Have you ever done anything against that characteristic (and be honest)?

Are you that way inside the field as well as outside?

Next time out ... what do you see ... and how does that align with your own character?
Are there management techniques to be had for each personality type, motivations to understand?

Outgoing FIFA President Sepp Blatter is recovering this week after being hospitalized in Switzerland for what has been called a stress-related "body breakdown" and a "small emotional breakdown" in several media reports.

The embattled Blatter, 79, was provisionally suspended last month from his post amid the ongoing corruption scandal involving FIFA, the world's governing body of soccer. He is expected to make a full recovery and be released from the hospital early next week, according to the BBC. ...

Kicking Back Comments: Frankly I am surprised it took this long as the amount of strain he must be under I have to believe is nothing short of suffocating.


A few hours before the U.S. World Cup qualifying opener in St. Louis on Friday, U.S. Soccer Federation President Sunil Gulati met with a group of reporters to discuss Jurgen Klinsmann, the national team, the broader program, FIFA and other matters, including everyone’s favorite, promotion and relegation.

See the full article here, courtesy of the Washington Post.

Kicking Back Comments: This was a very interesting article and it spoke on quite a few topics. One thing that did catch my attention was that President Gulati was kept from Congress and was very careful about his answers regarding FIFA and others caught in corruption issues. Almost too careful. 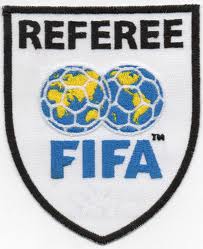 Congratulations to the following Massachusetts referees for their significant accomplishments to upgrade! May their success continue well into the future.

I did have to laugh a little bit in looking back at this picture and article from my post in July. For any offended by my not taking the topic seriously enough, please note the sarcasm tag is now turned off.

Concussions are serious things and I do take them seriously. What is being proposed beyond regular education and evaluation however, in my opinion is a reaction to a lawsuit, not a solution.

I continue to find it interesting how folks are reacting to this too, even comments on the US Soccer web site with the press release are largely truly negative.

This is a serious topic that needs a serious answer, unfortunately the answer provided in the settlement would on the surface not seem to fully address the practical enforcability or acknowledge some of the actual science behind such injury and its occurrence rates for soccer players.

No more headers in soccer ... and guess who will have to judge

In a settlement announced on Monday by Hagens Berman, a law firm that represented youth players in a class action lawsuit against six the largest youth soccer groups, U.S. players who are aged 10 and under will no longer be able to head the ball, while players aged 11 through 13 will be restricted by a length of practice with headers and number of total headers allowed per player per week.

The settlement also, for the first time, mandates a standard protocol to follow when a player is found to have sustained a concussion. ...

Kicking Back Comments: You can see the genesis of the suit from an article here. There are elements of the settlement that I think have great merit, such as allowing a temporary substitution to allow for concussion evaluation and having a standard procedure for evaluating same. All good stuff.

Limiting headers, frankly is crap, and untenable to patrol. While this settlement occurred just Monday the 9th, the practical effects are really yet to be felt by referees across the US ... I am sure that was not even a thought in US Soccer's head however. Enforcement ... we'll figure that out later.

As an organization we are having issues getting young referees to determine and stop play when a player uses their hands in U10 matches ... never mind finding a referee to even do those games these days. But sure, throw that log on the fire of no head balls ... I can hear it now ... "SHE HEADED IT ... THAT'S A FOUL" ...

OMG I am going to lose my mind watching these matches next year.

What I found somewhat laughable and ironic about all of this at the high level I have examined it so far is the lead attorney in the suit, Steve W. Berman, was paid his handsome fees by US Soccer to the tune of $590,000 when none of this was supposed to be about money, but about safety. (What ever happened to pro bono work?) Something Steve I would think should care about as per his bio he himself is a "certified soccer referee."

I'll wait to see what the full settlement holds and how US Soccer plans to ask its youngest and least experienced group of referees to implement these very nuanced changes to the LOTG and effect the very fabric of how The Game is played today.

Until then, stay tuned as the comments surrounding this change are generally not positive ones.

Referee with TISOA Chapter at Nisoa College Referee
So as a referee do we red card the youth that head the ball now. Here come another LOTG #18.
Like · Reply ·

Jj Garcia
Thats my concern about this and I'm not even a ref. How is this going to managed in games when sometimes heading the ball is an instinctual move to get the ball clear or control it. Who to say that coaches of rec level or higher are going to be actually counting with a counter or something of that sorts. I cant see how this can be monitored in practices with all the teams that are out there.
Like · Reply · 6 hrs

Mike Naka
Jj Garcia Gotta love the USA and the sue everything culture...