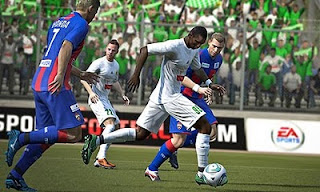 So here we go again. The annual iteration, the roster update, the Fifa gravy train chugs on… Except, EA Canada has never really been into the idea of making the same thing over and over again with just a serving of updated team sheets, a couple of fresh modes and a new photo of Rooney for the cover. ...
See the full review here, courtesy of The Guardian.
Kicking Back Comments: Oh yes, it shall be mine soon.
Posted by Unknown at 9/30/2011 07:30:00 AM No comments:

I was cruising the net the other day and ran across Dutch Referee Blog. It's a good blog with some interesting content worth reading.

I found one article ... interesting. See 15 minute stop to check the Laws of the Game.
From the article there are a couple of things that caught my attention. First was the lede:

Referees, always make sure have the number of the FA office in your cellphone, just in case you forgot the latest changes in the football rules.

Okay, fair enough. Good to have the league office number in there so pre or post match if you need to report an incident or get a clarification about something (can that player play?) you can do so. Not a bad idea ... right?
Then this came:

The Dutch women’s match between Odysseus’91 and Wartburgia on second amateur level was stopped for at least fifteen minutes, because referee Nielen was not sure he made the right decision.

Nielen doubted and made a call to the KNVB, the Dutch FA, and after fifteen minutes he got his answer ...

WHAT!?!? Hang on coach, let me whip out my iPhone and call the league office, or better yet consult the LOTG I keep in electronic form on there.

Are you (bleeping) me?
Friends, know the LOTG and the respective rule of the competition BEFORE going into a match. While things like substitutions can generally be sorted out on the fly and corrected before an error occurs, goal - no goal decisions on penalties have to be automatic from a referee.
Yes, "getting it right" is critical by using non-traditional methods (jumbo-tron anyone?), but is not a substitute for proper preparation.
While the referee was happy about the decision, I would frankly be embarrassed that I did not go into the match knowing the black letter law about when a goal could be scored. I don't know what the league said on the topic, but I have to believe that are not completely happy either.
Posted by Unknown at 9/29/2011 07:30:00 AM No comments:

Every once in a while I get a mail from Proreferee.com. It's a fairly recent addition to cyberspace and one I enjoy.

They have launched a web store that carries not just US based equipment, but also equipment from other parts of the world.

I ran across the Referee Match Report Card, and thought it was pretty neat. It's only downside is that it is printed in German. Not  that I don't like German ... I just can't read it well.

Back almost a year ago, we spoke about Byron Moreno and the trouble he was in regarding his arrest for heroin possession. These stories are here for reference:

Well Moreno plead guilty to heroin possession and smuggling charges and sentenced to 2 1/2 years (source). This was down from a possible maximum of 10 years, and reduced further as he has apparently been a model prisoner in the federal jail in Brooklyn. One of the mitigating factors in reducing his sentence ... he created a prison soccer league.
A sad fall from grace in my opinion. World Cup referee to prison rec league organizer.
Moreno will be deported back to his native Ecuador following his sentence.
Posted by Unknown at 9/27/2011 07:30:00 AM No comments:

Previously on Kicking Back we have discussed the age restriction that FIFA panel members have to live by. In short, you may referee until age 45, after that, you are retired from the panel. Keep in mind the history as well, that this age is down from 50 years old, not too long ago.

Well there are a couple of things that continue to make be believe that this decision for such highly trained athletes (i.e. the referees and ARs) is nonsense.

First, admittedly is my bias as I start to approach that age of mandatory retirement. Granted I may be having a Logan's Run moment, but I digress.

Second, is my genuine belief that fitness alone does not make a good referee. Or to say it a different way, fitness is not the only concern in such a realm. Now granted, fitness is critical, but it is not the end all be all in controlling a match. A referee can survive with slightly sub-par fitness (relative to a Cooper or BIP test) and do just fine. Lets face it no one is "on" 100% of the time. In fact, if you look at it from a sports science perspective, it can take anywhere from 10 to 21 days for an athlete to peak in fitness level, far more than the interval between matches.

Third, and this is really what spurred this whole thing, is Diana Nyad. Here is a woman who is swimming between Cuba and Florida. That's 103 miles. Yikes! (As a personal aside I have been toying with doing some sprint triathlons and even the 1/4 swim is too much for me) By the way, did I mention she had not swam at all in some 30 years?

Still think 45 is the right age for retirement?

Listen, I know the science, after the mid 30's for a variety of reasons I won't bore you with here, fitness declines and can't be recovered. But this is as individual as the athlete themselves. To make such a sweeping generalization about everyone that 45 is it, may be a convenient application of Pareto Efficiency, but does not reflect the reality that referees need a component of life experience to manage such high level matches. Take a look at the ages of referees in World Cup Finals: In hovers right around 40 in recent history, and has been as old as 54 (George Reader in 1950).

One can not reasonably make the argument that a person is fit at 45, and 45 + 1 day they are not.

If a referee is not fit, release them, if they are however, don't prohibit them from competing if the only thing they have "against" them is their age.

There is a compelling argument the other way however that is tough to dispel, and can be found here from UEFA.
Posted by Unknown at 9/26/2011 07:30:00 AM No comments:

Welcome to the pros

Check out this post from Not Running A Hospital.

Who says being a pro is all that. Not me.

In this age, information is king. Hacking is a daily occurrence and rarely a day goes by when I don't read about, or experience first hand, the result of such an attack. (Here is an example of very recent event.) In fact, a small part of my day job is to manage the performance of some ethical (or white hat) hacking to improve our own products.

As most no doubt are aware, Official Sports International has been a staple supplier to the referee community for some time now. They currently have relationships with US Soccer, USASA, and NISOA to name a few. For a period of time, they were also the uniform supplier to MLS referees. I can say my discriminating tastes have me wearing only OSI equipment whenever I can.

It is sad to say that OSI was a target of hacking, and as such, crippled the OSI site for some time. In fact, the eCommerse portion of the site is down, and will apparently remain down indefinitely while and investigation is being conducted.

First is to share general goings on in the referee world. Also however is to get the word out to any who have not heard, as based on the info from the OSI site, not all who may have had data potentially compromised may have been notified electronically.

For me, OSI is treating this very seriously, and like their high quality products, is backing up their service with a discount and credit monitoring to affected customers. This is better service than most companies I have dealt with, even some of the very big ones.

Well friends, it has been a crazy few weeks. Between finishing my vacation and having a bunch of stories coming out of that, to the nightmare of hurricane Irene and the destruction it left (including some to one of my computers), and a couple of personal bumps in the road has made my recent time ... lets say ... interesting.

Before I start with a substantive post however, with everything that has gone on recently, it was a humbling reminder of how small and fragile we are as a species.

A very interesting reminder of this can also be found here, and below: