Over the next (3) days I am going to call out some folks in the media that I believe are pinheads. This distinction may be for a variety of reasons, or a single event. In all cases these are my personal opinions about their professional conduct or work product. I don't know these people personally, so I can not comment, nor will I comment on them personally.

So as readers have seen I have been talking a bit about the Tour de France and commenting about how these guys, like with soccer are real athletes ... tough athletes ... and deserve respect for that.

Well, almost on cue with the dramatic stage 9 crash of riders Fletcha and Hoogerland detailed in Not for wimps, we get treated to Michael Smith of ESPN laughing at the incident via twitter. A full accounting of his unprofessional and insulting conduct can be found here, courtesy of the Washington Post.

Now it was not his initial comment laughing at the incident, as I can almost stretch reality to say that an anxious laugh is not outside the possible, but to continue FOUR MORE TIMES (the tweets can be seen here) to insult decency with his vapid comments goes beyond the pale.
Icing on the cake was his feigned apology: 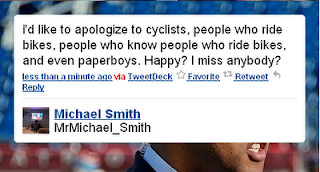 This really showed his professional level of respect for athletes, or those who follow athletes. I would surmise from his smarmy comments, he has none.
A simple apology, even if a lie, or even silence would have been better from the ESPN pundit.
So what are his credentials to make such a statement and dismiss such incredible tenacity that saw these riders return today to the TDF and continue to compete? You would figure he knows something that the rest of us don't as to what makes a pro athlete (any pro athlete) tick or some inside track about the difficulty of coming back from something like getting hit by a car, getting strung up in a barbed wire fence, receiving 30 stitches, and still getting back on a bike to ride 158km today.
Something? Anything?
Nothing. Except a BS from Loyola in 2001 for mass communication.
From his ESPN bio, he is a beat reporter and analyst. He has no athletic credentials to speak of that I could find. I would figure that such credentials would be touted by ESPN if he had any, even a scintilla of athleticism.
Nothing. Nada. Zip.
So why do we listen? Because he provides such cunning insight about things he watches? What makes him such an expert? He has never been there or done that with anything related to sports from what I can see.
It is easy to shower comments down to the masses in a lounge chair, when one has never been in the hot seat, any hot seat.
So as a professional, he is really nothing more than a guy with a microphone and no clue about what he is talking about as he has no life experience with professional sports (or even collegiate sports maybe) as an athlete.

Should that stop him? Heck no! Perspective is important and 3rd party observers contribute to the fabric of our culture greatly. Look at me (not for adding to the fabric, but), I talk about professional sports other than THE game, and while I worked in the professional leagues for many years, it was not in the NHL, NFL, MLB, NBA or international cycling, to name a few. It's just a perspective.

Now to me, Smith shows he does not respect sport, not just a sport, but sport in general through his comments. I can appreciate pundits who are not experts (i.e. never been there or done anything) who given opinions. I respect the thoughtful ones, and dismiss the bobble heads. Even the bobble heads often times at least feign interest in what they are commenting on and serve as an ambassador to their respective organization.

Smith through his actions in this matter, in my estimation, has neither respect for sport, nor is a good ambassador for ESPN. If he were he would have just said nothing, or offered a genuine apology it would never have been an issue as, I don't think it is in his DNA to offer a genuine comment about the sheer athleticism of what happened to Fletcha and Hoogerland, or for that matter about cycling.
So the irony left is that ESPN has a sports commentator that does not respect sport. Sounds pretty useless to me.
A petition to have Michael Smith suspended from ESPN is here. I already signed it as Smiths conduct is inappropriate to have an ambassador of a sports media outlet show such disrespect for sport in general.
Posted by Unknown at 7/13/2011 07:30:00 AM